We have a great bay window directly in our entryway, and I think it’s one of the elements that made us decide on this house. Not the window itself, but the fact that it adds such a nice, airy feeling to an otherwise pretty small area.

I added a console shelving unit here when we moved in, but it was always a bit too big for the space. The bright, open area kind of got lost with the big dark wood console there. I knew I wanted to do something different, but I wasn’t sure what. I moved a smaller cabinet here when I moved it out of our dining room (more on that later). It looked nice, but it was actually too small for the space, and was wasting space. Plus, I wanted the cabinet in the living room, where it is now. Another motivator, for me especially, was that we only had one chair in the entryway and I always ended up sitting on the floor getting the kids ready to get out the door. We needed somewhere to sit.

So, we decided to tackle a built-in bench for the entryway. A simple, floating bench with a simple, upholstered seat on top. That way, it would add space for storage, and still accomplish the nice, airy feeling we were going for. Part of this included getting the big dark wood console into the front hall closet, by myself. That was pretty fun, haha! In a future post, I’ll break down the materials and steps we took to build it the bench.

I loved these cute belly baskets. They’re a little smaller than I expected when I ordered them, but they turned out to be perfect for holding the kids’ shoes, shopping bags, and my small purses. I reallllllly wanted this runner from Urban Outfitters and love it so much! The neutral but feminine colours, and the pattern that hides the dirt and dust that we inevitably track in. We wish there was a large one for under the dining table, but I think the largest is 5×7. I thought it might be a little busy with both the bench material pattern and the rug, but I really like how the patterns play off of each other.

Then, I added some throw pillows to the corners of the window to add some softness to the bench. It was in the plan to add curtain to the windows here, but they got in the way when sitting on the bench and wouldn’t open and close properly. I may eventually switch out these blinds with nice light rattan ones, or even the roman shades from IKEA. They have plain white and a subtle light blue/gray stripe and I’m deciding between the two.

For now though, the kids really love sitting here and looking out the window. And we finally ALL have somewhere to sit when we’re getting ready to go out the door.

Next on our house tour, the powder room! 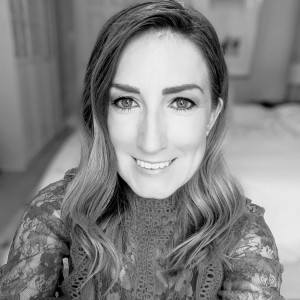 Hello!
My name is Kristen.
I love cost-conscious home decor, simple DIY projects, fashion and my family.
Check out the About tab to read more.
Thanks for stopping by!